In 2013, the Liberal-National Government pledged that it was the ‘decade of decentralisation’ – they pledged to slash office space in the Sydney CBD and move more public servants positions out to regional NSW.

Since then successive versions of Liberal-National Governments have failed in their pledge to decentralise public servants.

In fact, they’ve spent their time slashing jobs in the bush. You can read my speech about that Let's talk about jobs.

COVID-19 has shown that public servants can remain productive working from home – so why can’t their home be in Barwon?

Telework - working online from home - is a huge opportunity to decentralise government departments and create employment in regional NSW.

I’ve drafted a Bill, that would require the state government to assess more than 300,000 public sector positions for suitability for teleworking.

On 14 July, the Northern Daily Leader published an article about my bill Shooters, Fishers and Farmers bill would force government to investigate working from home option for 300,000 public servants

They sought comment from the Deputy Premier about this bill and the potential benefit to regional NSW, which lead to the follow up article Nationals say Shooters bill to get public servants teleworking is just grand standing.
In the Deputy Premier's response he says I have not raised the proposed legislation with him once.

It’s disappointing and alarming that the Deputy Premier would claim he was unaware of the Teleworking bill.

I wrote to all regional Members of Parliament, the Deputy Premier  and the Premier on 5 May 2020 seeking their support for the proposal. I know it went, not only can I prove it went, but have had discussions with Government and Non-Government members about it since.

It's odd that John would suggest that a bill bringing employment opportunities and cash to Regional areas in NSW is 'grandstanding'.

This bill would bring benefits to his own state electorate of Monaro. About 10 days after I started talking publicly about the bill, a Federal Nationals member started making the same noises about teleworking. I didn’t hear any claims of grandstanding.

John talked about 400 jobs he delivered to Regional NSW – it was part of his response to the article. Its good news - But they are in National Party held seats. What happened to the claims that the Berejiklian-Barilaro Government would be a Government for all seats and people in NSW?

One would think if a Regional Member of Parliament, with the largest rural electorate in the State (44% of NSW) writes to the Minister for Regional NSW he would sit up and take notice. Especially when that seat was lost after 70 years to the person writing to him. He maybe doesn’t realise I worked across Barwon for 17 years prior to election, with Police, Human Services and Corrections. I talk to people all over the electorate, I might have something that would actually help.

If the National Party wants to remain relevant in Regional NSW, start to listen to what the people taking seats from you are saying.

If I hadn't communicated with John about this, I would cop the criticism. But a formal letter, and a discussion in Parliament House... I won't stand idle under those circumstances.

I don't care if they support my bill, or introduce their own that does the same. I just want to see the outcome. 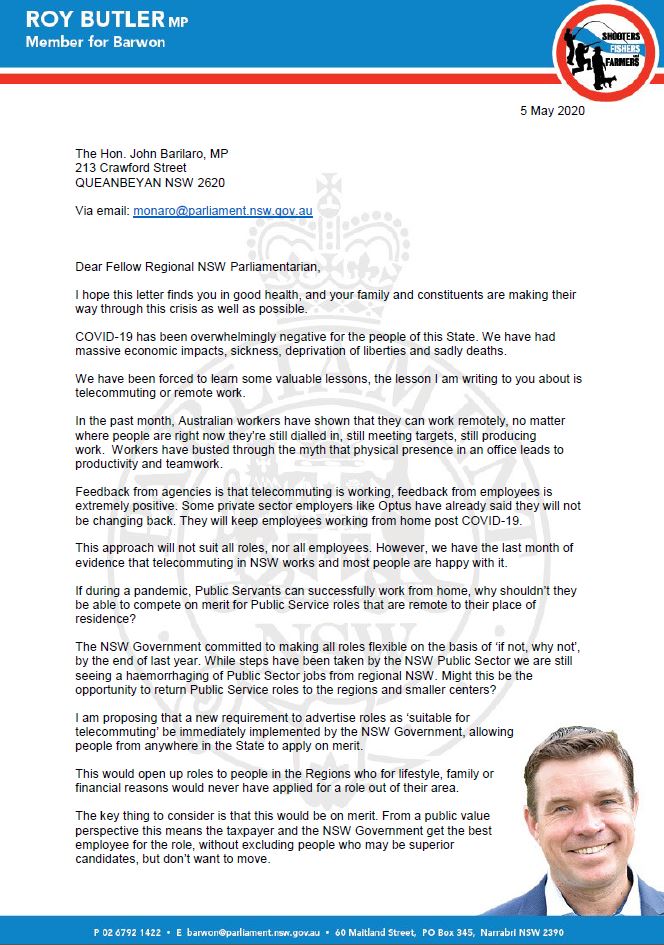 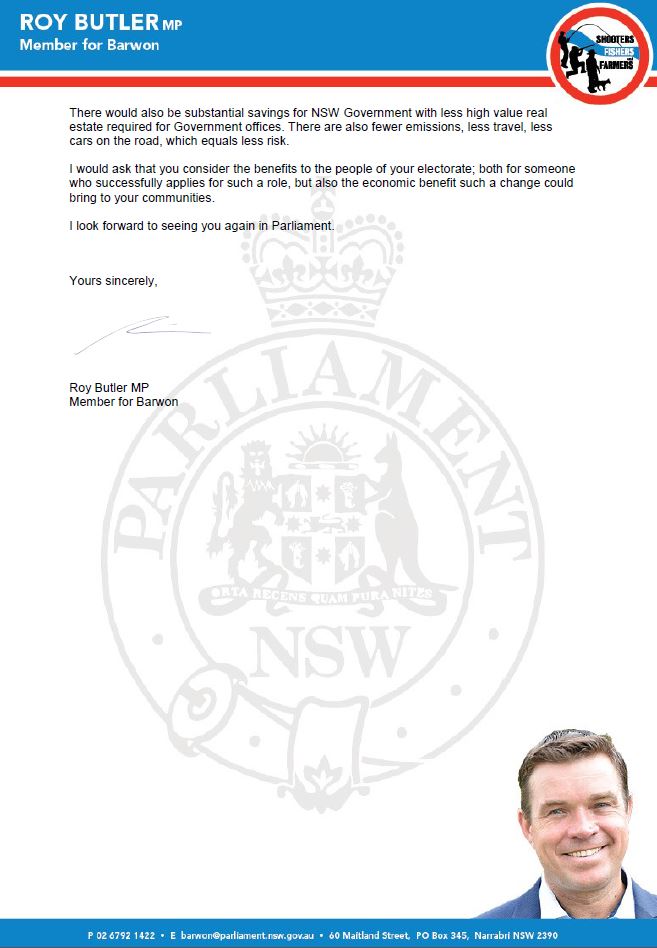